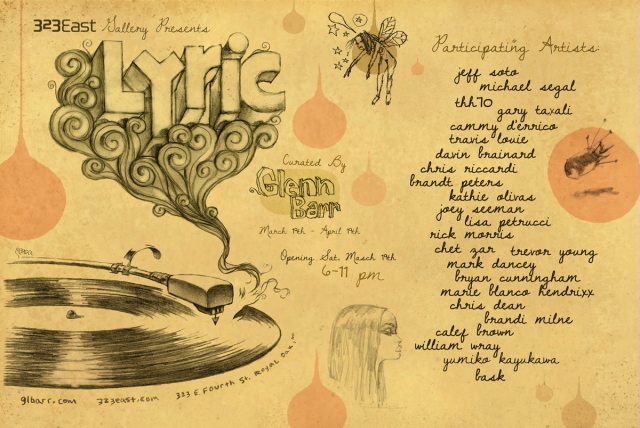 Curated by my friend and fellow artist Glenn Barr (who I first met at our show together in Dallas, TX in January 2010), LYRIC is a show based on music, plain and simple, and how the power of lyrics can (and will) speak to you. The theme of the show really hits home for me, as my work relies so heavily on how words are used…or misused. ;-) FULL DETAILS OF THE SHOW / ONLINE PREVIEW!

The show is ridiculously amazing — the line-up of artists that Glenn got is probably the best roster of artists I’ve ever been in a show with (and that’s saying a lot): Jeff Soto, Gary Taxali, Cammy D’Errico, Travis Louie, Brandt Peters, Kathie Olivas, Chet Zar, Brandi Milne, Bask…the list goes on and on. My FAVORITE part about the show is that my good friend Joey Seeman is also in it, who was also in the show with Glenn and I back in Dallas. The Three Amigos strike again!!! LOL

I highly stress that if you’re in the Detroit area this weekend (or thru the show’s run, ending on April 19th), that you head over to check it out. If you cannt attend, here is the link to the special online preview to view all the work. CLICK HERE! 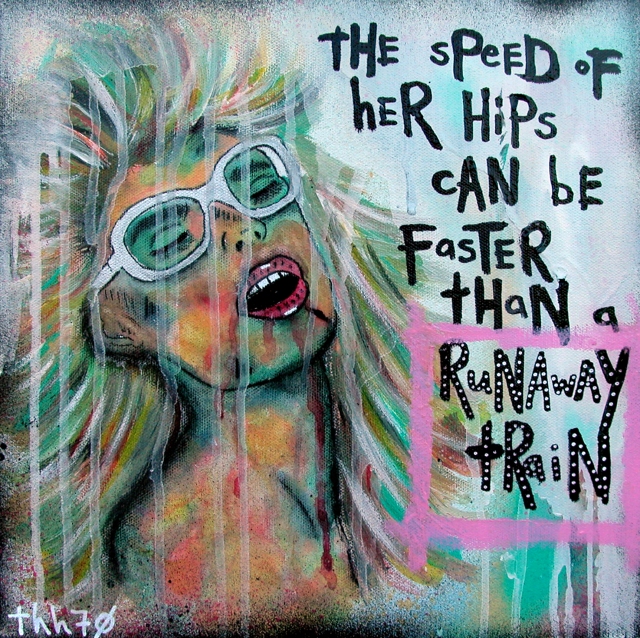 ***In other show news, my current show in Los Angeles, “some of its parts” is still going strong!*** 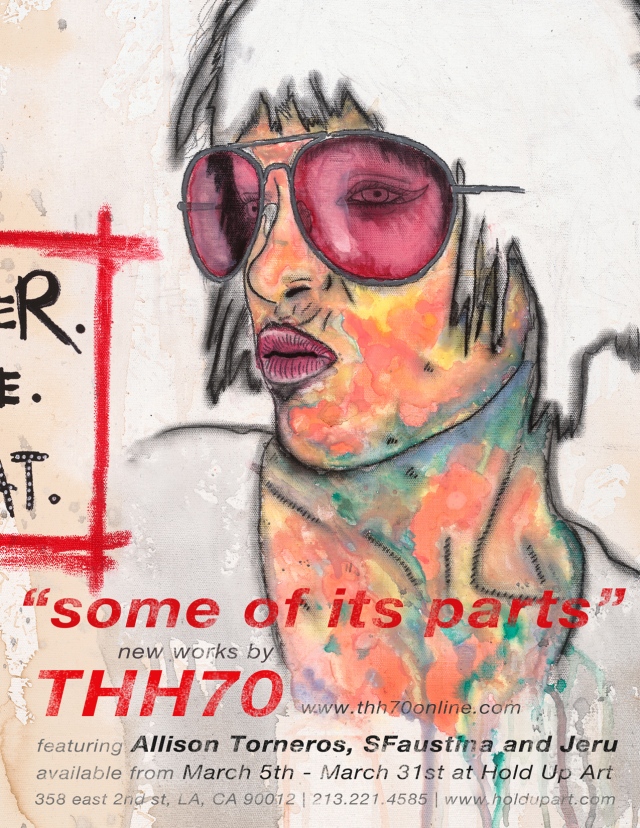 The show continues thru March 31st, so hit up Hold Up Art Gallery if you’re in L.A.! If not, check out the ONLINE PREVIEW and e-mail me to check on availability of any work you’re interested in…

Stay up-to-date by reading my blog at https://thh70.wordpress.com and by visiting www.thh70online.com

THH70 was born in human form in 1970 in Los Angeles, California, but the "persona" of his nom de plume was conceived in late 1994 as a stage name for his burgeoning music career. Consequently, he is now an accomplished worldwide-selling visual artist, with his works in private and corporate collections on every continent. Since beginning to actively market and sell his artwork in November 2000, he has sold well over 1000 original mixed media pieces worldwide (with that number continuing to grow), and is considered a “P.T. Barnum-esque” showman of marketing and self-promotion, with his website garnering roughly 25,000 hits per month with virtually no third-party advertising. THH70 is known worldwide for his unique artistic approach that he has branded "lo-fi urban abstract graffiti" where, painting on a wide variety of surfaces, he combines crude painterly techniques utilizing materials and media that include everything from acrylics to spray paint to household products like Windex and X-14 mildew remover with his own style of raw stream of consciousness wordplay and text. In the "brick and mortar" gallery world, THH70 and his own blend of visual mania have shown in solo and group shows across the United States at such important art galleries as BLK/MRKT Gallery (now Kinsey/DesForges) in Los Angeles, known to many as the apex of optimum alternative art on the West Coast, and the fashionable Diesel Gallery in New York City. Along the way, his work has been seen in galleries and art houses across the country, beginning with an auspicious 45-piece solo show at the now-defunct Organic Gallery in Silverlake, California. More recently, he was personally invited to be an artist in BLK/MRKT Gallery’s first “Artist’s Annual” in 2006 along with 24 other artists across the globe (including the likes of Jeff Soto, Tiffany Bozic, Dave Kinsey, Evan Hecox, David Choe, Tes One, and WK Interact) that are considered the cream of the Alternative Art crop. The show was meticulously documented, and a hardcover leather-bound full-color catalogue, entitled “BLK/MRKT: ONE”, was published and released across the world by famed European art publisher Die Gestalten Verlag. Additionally, the work of THH70 has been seen in the Alternative Art magazine JUXTAPOZ on several occasions. In early-2002, THH70, sensing an absence in the online marketplace for a central hub for like-minded artists to collectively exhibit their work, as well as to be a jump-off point to inform current and potential collectors of their website, gallery, auction, and sales information, he created AOA – Alternative Online Artists, an online nationwide juried collective of almost 30 artists. Since founded, AOA has selected and maintained a group of the nation’s most diverse, successful and consistent alternative artists (with these artists encompassing the many styles of Pop, Outsider, Graffiti, Fluxus, Dada, Contemporary, Modern, Lowbrow, Urban, Abstract, Graphic Design, and Folk, as well as entering into the now-lucrative arena of limited edition vinyl art toys). These AOA artists (which has included such luminaries as DAVMO, Gus Fink, SFAUSTINA, Nix Toxic and of course, THH70) continue to make ever-crashing waves in the art world. In late 2005, THH70 was interviewed at length on film for the documentary “America’s Chemical Angels”, a film by documentarian Oxana Chumak about the overmedication of children with ADD/ADHD. In addition to the interview footage, THH70’s seminal 2002 painting “RITALIN®” is featured prominently in the film, as well as in it’s promotional advertising. Additionally, THH70 is an accomplished musician/recording artist. He was tour keyboardist for Billboard Top 10 New Age recording artist Nicholas Gunn, and was subsequently signed to a multi-album recording contract by a national record label. In 2003, he wrote and performed on Mr. Gunn’s commercially and critically acclaimed album “Journey To Yellowstone”, with his penned "Nature's Cry" garnering the most radio play of any song on that album. In June 2007, THH70 digitally released an album across the Internet under the moniker ELEMENTAL with his periodic music partner David Damato. The latest THH70 solo album, entitled "demologiQue: explorations in texture" was released in January of 2008. THH70 also has added “voice actor” to his extensive creative resumé: in 2007 he was hired by top animation and video game sound design company Okratron 5000 to voice multiple characters for the Japanese anime series “Glass Fleet – The Legend of the Wind of the Universe (Garasu no Kantai)”. 2008 was an auspicious year for THH70, with multiple shows across the United States, hanging his work alongside artists such as Buff Monster, Greg Lamarche, Josh Keyes, Greg Gossel, Amy Sol, and many other alternative art "heavy hitters". September 2008 saw the release of THH70's first-ever self-published art catalogue - a 94 page full-color book chronicling a selection of works spanning the last several years. He was also a contributing editor to Mad Skills Magazine, an online arts & culture magazine in Europe. 2009 has already begun on a high note for the artist with his participation in a massive Obama-themed art exhibit in the Dominican Republic. The show, which included artists such as Shepard Fairey, Ron English, Ray Noland and others, displayed THH70 as the only artist to be specially commissioned for his work in the entire show of over 80 pieces. In the Fall, he will be including his work in a museum retrospective in the Contemporary Art Center of Virginia. THH70 resides in Dallas, Texas. www.thh70online.com www.myspace.com/thh70 www.aoacollective.com
View all posts by thh70 →
This entry was posted in Announcements, Artwork, Miscellaneous, Music, Publicity and tagged 323 East, abstract, allison torneros, alternative, art, Art museum, bask, Black Album, brandi milne, brandt peters, Brian Lee, cammy d'errico, Canvas, Chet Zar, contemporary, dallas, detroit, Detroit Rock City, exhibit, facebook, gallery, Gary Taxali, glenn barr, graffiti, hold up art, illustration, Jeff Soto, jeru gabriel, joey seeman, kathie olivas, l.a., lisa petrucci, little tokyo, los angeles, Lovesexy, lowbrow, lyric, michigan, mixed media, modern, painting, pop, pop surrealism, royal oak, sfaustina, some of its parts, street, the 4th wall gallery, thh70, travis louie, twitter, urban, Visual Arts. Bookmark the permalink.